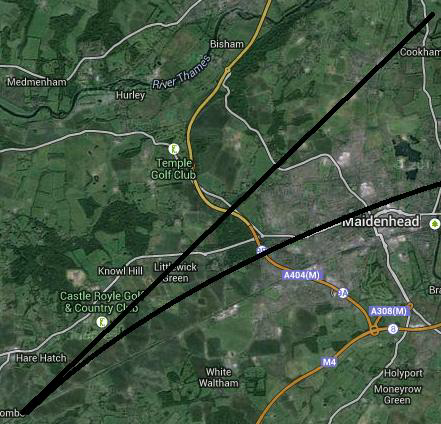 Map showing two plausible routes for a Roman Road, Camlet Way; the route posited in the 1960s that bisects Cookham, and the route discussed in the 1930s, a more southerly route. Both of these roads could exist, or indeed neither. Both could have been built in the Roman period, or be of earlier origin and used during the Roman period.

Local histories assert that a Roman Road, "Camlet Way", linked St Albans and Silchester, crossing the Thames at Hedsor Wharf and continuing through Cookham and on towards Maidenhead Thicket; yet there is no historical record of such a road, nor is there any firm evidence. In fact, this route was only conceived as recently as the mid-1960s as part of a wider scheme mapping all of the Roman Roads that might have existed in the South Midlands area. This is not however the earliest use of "Camlet Way". According to Wikipedia the term was first used in the Bucks, Berks and Oxon Archaeological Journal in 1892 and, although that reference has proved elusive, Camlet Way is applied to describe a road, said to be Roman in origin that comes from the south-west, running south of the modern A4 as far as Maidenhead; see Berkshire Archaeological Journal 36 (1932) at http://archaeologydataservice.ac.uk/archives/archiveDownload?t=arch-787-1/dissemination/pdf/BAJ036_PDFs/BAJ036_A04_seaby.pdf

There is in fact good circumstantial archaeological evidence for a road along the more southerly route. It links all five of the Roman period villas that are known or presumed to exist in the area between Waltham St Lawrence and Maidenhead. It is also an obvious route for moving agricultural surpluses from Roman farmsteads that occupied the fertile fields around Waltham St Lawrence to a convenient river embarkation point for reaching the markets at London. There is little direct evidence of the road – the wide track along the southern edge of Maidenhead Thicket is perhaps the strongest candidate. Also, it is more likely to date to an earlier period, but then also used during the Roman period

Does this preclude a Roman Road called Camlet Way running through Cookham? Not necessarily. There is an archaeological saying that absence of evidence isn't evidence of absence. A road through Cookham could exist exactly as posited in the 1960s. Equally, people often mistakenly assume that Roman Roads are straight roads: some are, but plenty aren't; and the Romans were equally happy to make full use of existing roads. So we continue to explore all possibilities in our investigations locally, and would welcome input from others interested in this topic by e-mail to carverfamily@btinternet.com